In colonial days in Virginia, the Sheriff was a formidable figure. Vested with as much dignity as their counterpart in England, this Officer of the County Court was the collector of public and parish levies, keeper of the County prison and public hangman. Acting as an arresting officer, they were required to physically lay hands upon the accused. They could use force, break down doors, commandeer anyone or anything — people, horses, boats — when pursuing a felon.

In that time, the Governor and council appointed the Sheriff upon recommendation of the county commissioners. Today, the Sheriff is a Constitutional Officer, one of two elective Officers in the criminal justice system. The Sheriff is responsible for the local jail, is the administrative officer of the court, and performs other criminal law enforcement and civil law functions.

In the late 1940s, one Circuit Court and one County Court served the people, in contrast to today’s four Circuit Courts, three District Courts, and two Juvenile and Domestic Relations Courts. In 1940, upon the recommendation of Sheriff Howard B. Fields and approval of the Circuit Court, a separate Police Department was formed and moved under the County Manager, a trend in urban law enforcement agencies at that time.

Eighteen Sheriffs have served in Arlington starting in 1869 when the County was part of Alexandria. Of these, the voters elected 14; the courts appointed five. Two resigned; two died in office. One served 20 years, the longest time in office; one, a few months.

Past Sheriffs for Arlington County

Sheriff Beth Arthur is also an immediate past president of the Virginia Sheriffs’ Association. 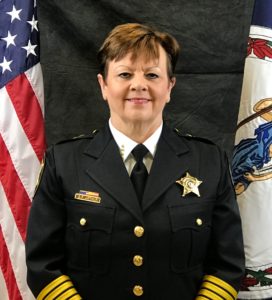